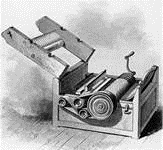 Behind Every Great Man - is a Female Sponsor?

Has anyone heard of Catherine Littlefield Greene? My guess is that you haven't. She was born in Rhode Island in 1755, married a farmer who would serve as an officer in the Continental army, raised five children nearly alone and lived out her days after he died creating a successful plantation operation with her second husband on Cumberland Island in Georgia, where she died in 1814.

And this matters "how" you say? Well, in 1883, an article in The North American Review titled "Woman as Inventor" gave Catherine credit for the innovation that gave us the Cotton Gin, that ubiquitous symbol of an invention that changes the world. Is that really possible? While there are no independent sources that can validate the claim, this much is known:

Did Catherine invent the cotton gin? Probably not entirely, but it was asserted in the 1883 article that the key innovation that led to success after six years - the brush-like part critical in the removal of seeds from cotton - was her brainchild. It is hard not to imagine that she had quite a bit to do with it, and not implausible to imagine there are many other examples of innovations we all benefitted from without knowing their true origins.

Do you know of any other innovators in your midst that deserve bigger typeface in the credits?

Introducing the Women in Innovation Summit

This year there is a unique opportunity to be part of revealing more untold stories on women in innovation. On September 22, 2012, Seattle will be hosting the first-ever "Women in Innovation Summit". This special event will bring together 400 people from all over the world who will combine energies to raise the profile for those history may have bypassed and create the framework to better recognize innovators among us today and inspire those of tomorrow. With a great (and growing) speakers list led by Washington's own Governor Christine Gregoire, it will definitely be a worth the time to get connected to what promises to be a fantastic new network of innovation.

How can I get involved?

Participate, share the message, be a sponsor or recommend a great speaker. There are a lot of untold stories out there, be a part of getting them written!